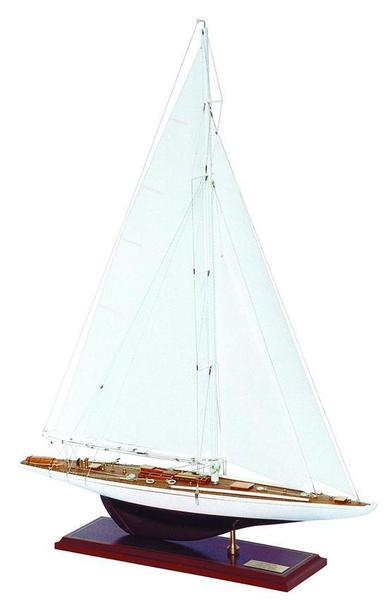 Museum Quality History of the Ranger:

William Starling Burgess was 58 years old when Mike Vanderbilt asked him to join forces with the young rising star of American naval architecture, Olin Stephens, aged 28. Of a common agreement, the two men each made drawings, the models of which were tested at Hoboken. The contract between the two men stipulates that the name of the architect of the defender chosen to remain secret with the merit of the final product being attributed to both of them. The first tank tests were carried out with models of Weetamoe, Rainbow and Endeavour. They finally agreed on the model 77C of their designs, and tried to improve it, but in vain: the model was perfect. The choice of the model of Ranger astonished Burgess: without the test results no-one would have dared choose such a design. Ranger became part of the legend by her superiority and her victory in the race. In the last Race, Ranger had set a new Cup record over the triangular course, previously set by Endeavour I in the second race of the 1934 challenge, in 3 hours 9 minutes 1 second that is to say 1 minute 12 seconds less than the 1934 chalenger. An excellent atmosphere reigned over the races of the sixteenth challenge, with no squabbling or protests. Endeavour II had been beaten by a faster boat. Even Charles E.Nicholson admitted, when he was finally allowed to study Ranger's lines at close quarters, that the defender represented the most revolutionary step forward in yacht hull design over the last 50 years. Shortly after the challenge, the two Endeavour's joined Rainbow, Yankee and Ranger and took part in the NYYC's Annual Cruise and then in races for the Cities of Newport and Marblehead Cups. Of the thirteen races sailed, Ranger won twelve. During the 1937 season, between June and September out of 37 races, including the America's Cup races, Ranger won 35 times. Ranger- super J! This just about sums up the 1937 challenge, and words are not enough to describe the marvellous performance of this fabulous yacht will haunt the world of big yachts forever. Ranger had a spinmaker made of 2-ounce Egyptian cotton that was 18,000 square feet- the world’s largest. It flew on a pole that was designed for 50 years. The Vanderbilt boat could not be beaten; she could only be appreciated. Ranger slaughtered the other potential defenders during the trials. The final race was one in 18 minutes. For the entire summer, in different types of racing, Ranger was 32 of 34 contests and as never defeated in 12 match races.