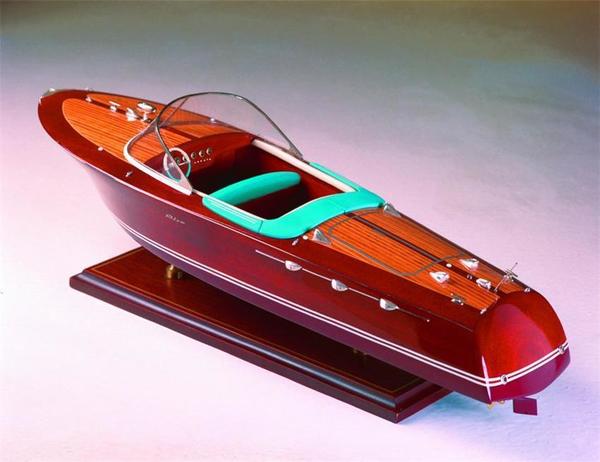 Museum Quality History of the Ariston:

Named after the Cinema Ariston in the center of Milan, the Riva Ariston is 6.52m long and welcomes 6 passengers on two large benches. Only 1012 were constructed. At the beginning, the Riva Ariston was powered by a 185 horse 8V Chris Craft engine. Later it was powered by a 220 horse, then by a 290 horse power engine that permit it to reach the speed of 70km/h. The pure lines of the boat had evolved to reach its equilibrium in the Super Edition built in 1968. With a 350 horse Riva power engine its speed was more than 80km/h. The functional capote gives the boat the classic elegance typical of Riva Style. Without question - Riva of Italy - which traces its beginnings to a mid-19th century carpenter shop - is the world leader in producing elegant, luxury wooden runabouts. The production of the Riva Ariston started in 1950 to finish in 1976. With 1012 exemplary constructed, it is the boat that Riva Shipyard had constructed the longer. Triumphing at all the boat shows and on all the markets in the world. Kings and emperors, princes and sultans, actors, sportsmen and celebrities, and all the international jet-set that filled the pages of glossy-magazines, headed straight to Riva to choose their boats in the same way as they went to Rolls-Royce or Ferrari for their cars. During this period after WW II, Riva boats became a legend throughout the world, an object of desire and an expression of dreams. Nothing came near to matching the superb quality, style and prestige of the Riva, which was firmly established in a class of its own.