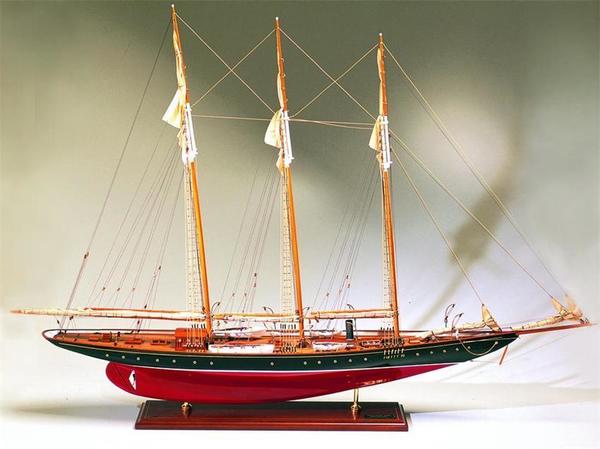 Enhance your living room or your lounge area with the Atlantic 1903 Model Ship. Handmade and crafted to perfection, the Atlantic model ship is one of true elegance and beauty. The attention to detail for this ship is in another league compared to other model ships out there. Unlike a plastic model ship, this one is made of real wood and carved out to mirror the actual Atlantic ship that was built in 1903. Below is the history behind the Atlantic Ship.

Museum Quality History of the Atlantic:

The Atlantic was designed by William Gardner and launched in New York in 1903. Built for Wilson Marshall, Atlantic's greatest claim to fame came in 1905 when she was one of eleven yachts to compete for the Emperor's Cup put up by Kaiser Wilhelm for a race between New York and Lizard Head, England. Among the eight American, two British, and one German entrants were Lord Brassey's Sunbeam and the 239’ full-rigged British ship Valhalla. Atlantic's professional captain Charles Barr — a veteran of America's Cup campaigns in Columbia (1899 and 1901) and Reliance (1903) — drove the powerful schooner through a violent gale to a crossing in 12 days, 4 hours. Her 348-mile day's run on May 23-24 has never been beat, and her overall time was not beat until 1968, when Eric Taberly's 58’ trimaran Paul Richard made the passage in 10 days, 5 hours, and 14 minutes. During World War I, Marshall publicly smashed the Emperor's Cup with the intent of donating the gold to the Red Cross; it turned out to be gold-plated pewter worth about $35. Sold to James Cox Bradley, Atlantic saw duty as a sub-chaser tender, and after World War I she was sold to Cornelius Vanderbilt. Under Gerard B. Lambert, heir to the company that made Listerine, she was a favorite to win the 1928 transatlantic race for the King's Cup sponsored by Alfonso XIII of Spain. She lost to Elena, and in the same race, Paul Hammond's Niña won the Queen's Cup for smaller boats. In 1935, she escorted Lambert's J-Boat Yankee to England for a series of races. Atlantic did little racing thereafter and in World War II she was transferred to the U.S. Coast Guard for use in antisubmarine duty. Following the war she was brought to the U.S. Coast Guard Academy for sail training. Towed to the Delaware River for breaking up a few years later, she was saved from the breakers by Ward Bright. His plans to restore the vessel came to naught, but her remains could still be seen on the river's Jersey shore following his death in 1968.