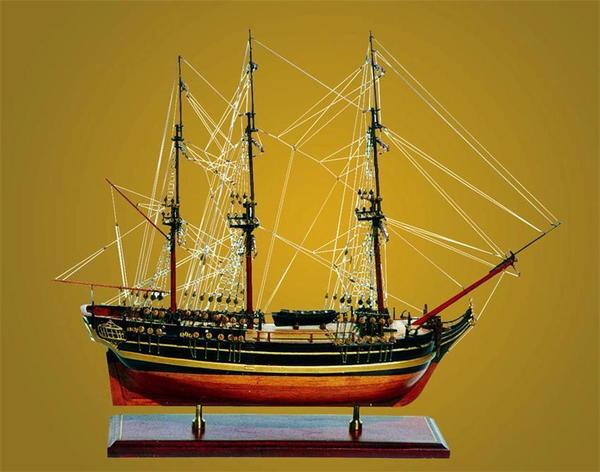 For the purpose of transporting native breadfruit trees from the South Pacific to the West Indies to be used as a staple for slaves, the British Royal Navy purchased the merchant ship Berthia from Messrs Wellbank, Sharp, and Brown on May 1787. The ship was re-fitted at Deptford Dock and officially designated Bounty. HMS Bounty set sail from Portsmouth on December 23, 1787 under the command of Lieutenant Bligh and arrived in Tahiti on October 26, 1788. The crew enjoyed five months on the paradise island before leaving on April 6, 1789 with over 1,000 breadfruit trees. On April 28 she was seized in a bloodless mutiny, led by Fletcher Christian. Bligh and nineteen of his followers were put on the 23 foot Bounty launch. The group attempted a landing on Tubuai but met an unfriendly reception, so they returned to Tahiti where they loaded hogs, goats, and 28 Tahitians. They made a second landing on Tubuai and befriended the chief and fifteen of his people, who left with them soon afterward. They landed a third time in Tahiti, where sixteen of the crew decided to stay. The mutineers then landed on Pitcairn Island in early 1790. They decided to burn the ship and remain on the island. Relations with the natives eventually turned for the worse. Eighteen years later the Nantucket Topaz visited Pitcairn to find just one of the original sailors surviving. The remaining mutineers that had settled on Tahiti were captured. Four of them drowned on the return to England when their captor, the Pandora, sank on a reef. The last ten mutineers were arrested and brought to England, where three of them were hung. Lieutenant Bligh amazingly made his way back on the small craft to Dutch East Timor, traveling 3,600 miles in 41 days with meager rations and unsheltered waters, using only a sextant and a pocket watch. In an outstanding feat of navigation, he lost only one of his crew and lived to re-perform his original commission in 1792 on the HMS Providence. The magnificent tale of the Bounty has inspired many generations, and continues to be re-told today in literature and films.