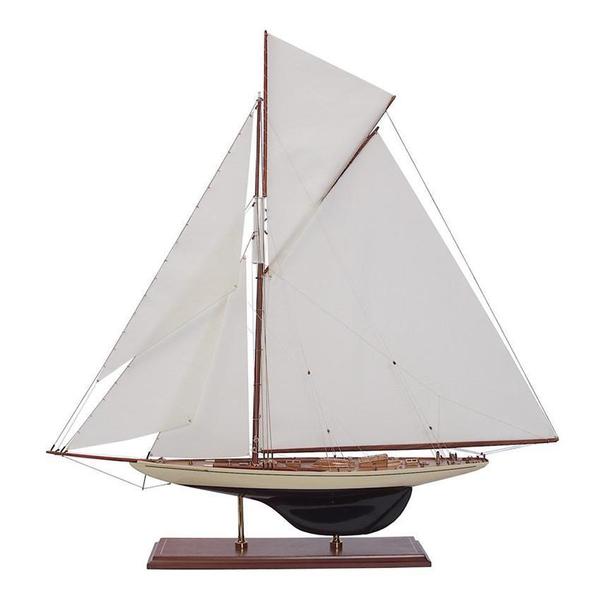 The Defender Model Yacht of 1895 was constructed in secret, as it was designed to race in America's Cup 1895. This ship is precisely designed to accurately model the actual Defender. The secret that was used to make the boat quick was aluminum. This model yacht is beautiful and will look great on your office wall or at home. A true eye-catcher, the Defender Model Yacht is one beautiful model that you will want to add to your home. Below is the history behind the Defender.

Museum Quality History of the Defender:

In 1894, William K. Vanderbilt came for the second time to see Nathanael Herreshoff to commission a new defender to race the America's Cup against Valkyrie III the next year. Vanderbilt was believing in Herreshoff's genious and gave ''carte blanche'' to the 'Wizard of Bristol' to build the New-York Yacht Club's next challenger. Herreshoff, reminded of his previous bad experience when Vigilant's sliding centerboard had jammed and hindered his boat: decided to build the Defender with a fin keel. The yacht was designed in the utmost secrecy and her construction was shrouded in mystery. Nobody was allowed to enter the yard and Captain Nat certainly did not appreciate the press. When building the Defender, the Hereshoff brothers' special innovation was the use of aluminium. The boat though, suffered from a phenomenon about which little was known at that time: corrosion due to electrolysis appeared after she was launched on June 23rd, 1895. America's Cup 1895: at the 9th challenge, Defender beated Valkyrie III and won the Cup.