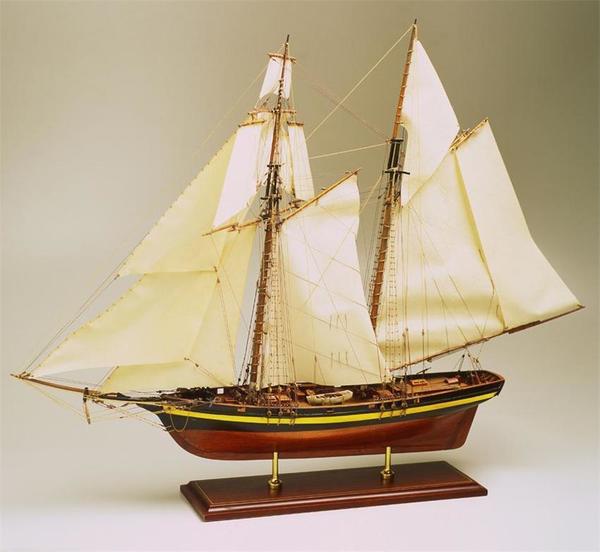 The Pride of Baltimore Model Ship is something you can look at and admire as it shines in all of its brilliance. Whether you place it on your desk, shelf, or other place, it will bring a new and refreshing nautical decor to your space. Unlike cheap and flimsy plastic model ships, this one from Abordage is made of wood with a beautiful stained varnish. Below is some history associated with the Pride of Baltimore Ship of the 1800's.

History of the Pride of Baltimore:

During the 1790's Maryland led the nation in shipbuilding and Baltimore was the undisputed leader on the Chesapeake Bay. Baltimore Clippers, built for speed at a time when it was essential for survival, won the respect of the nautical world. Baltimore became a center of maritime commerce and the home of some of the most creative shipbuilding. The design of the clippers emerged from the shipyards of Fells Point in response to the need for fast ships that could elude the British naval vessels that continued to prey upon American ships after the War for Independence. Baltimore Clippers were "sharp built". They had a V-shaped hull, allowing them to cut through waves. They were very fast, but had little cargo space (which eventually led to their decline). They were gaff-rigged schooners, although many had a square sail for driving power on the mast. These small fast ships were developed in the northern Chesapeake as foretopsail schooners, which carried 8 to 10 guns. Baltimore Clippers gained wide respect in the War of 1812. Sleek, daring, "privateers" were the life blood of the fledgling American nation during the War of 1812 as it fought for its freedom against the largest armada of fighting ships ever assembled. In 1974 Baltimore city officials decided to build a replica of a 19th century clipper to serve as a goodwill ambassador for the city. The ship, named Pride of Baltimore was launched at Baltimore’s Inner Harbor on February 27, 1977. The name captures the spirit of the phoenix-like town. She sailed over 150,000 nautical miles in nine years before she was struck by a freak squall and tragically sunk off the coast of Puerto Rico on May 14, 1986. The city commissioned a larger sister-ship as a sailing memorial to her predecessor, the original Pride. The Pride of Baltimore II was launched on April 30, 1989. She is a reproduction Baltimore Clipper and sails the seas of the world as the Goodwill Ambassador from the State of Maryland and the Port of Baltimore.

You can celebrate the Pride of Baltimore with this historical model ship.