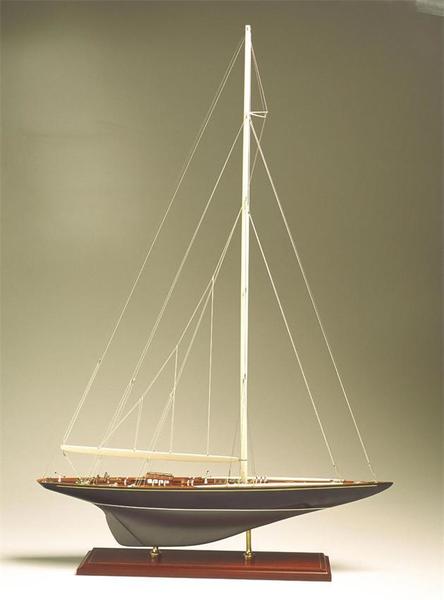 Museum Quality History of the Shamrock:

The most celebrated yachtsman ever to challenge for the America's Cup was the self-made millionaire Sir Thomas Lipton. Born to an Irish grocer in a Glasgow tenement, Lipton mounted the first of his five challenges under the auspices of the Royal Ulster Yacht Club in 1898. His William Fife-designed cutter Shamrock, the first challenger not to cross the Atlantic under its own power, lost to J. Pierpont Morgan's Columbia (designed by Nat Herreshoff) in three races. Gracious in defeat, Lipton was made an honorary member of the New York Yacht Club. Two years later, his George Watson-designed Shamrock II lost three races on corrected time to Columbia, though the margins were negligible and she actually crossed the line ahead by two seconds in the second race. The extreme limits of racing design were reached in 1903, when Fife's Shamrock III was pitted against Herreshoff's Reliance. The race conditions were mediocre, but in the contest between sail areas, Shamrock's 14,154 square feet were no match for Reliance's 17,730 square feet. These were the last America's Cup races for almost two decades, and when they resumed in 1920 it was with smaller yachts built to Herreshoff's International Rule. Shamrock IV and Resolute, both built before World War I, had the most exciting race series held to that time, and Shamrock IV won the first two of five races by decisive margins. The rules changed yet again and the 1930 America's Cup races were the first of three between yachts designed to the J-class rule. The celebrated J-boats with their lofty rigs, Bermuda rigs, and Park Avenue booms were between 75 and 87 feet in length, with sail areas between 7,550 and 7,583 square feet, though this included three headsails—jib, jig, and topsail jib. Shamrock V was no match for Resolute, which was chosen from among four trial boats, and she lost the series in four straight races. So ended the racing career of Sir Thomas Lipton, "the world's best loser," who died the next year at the age of eighty-one. Shamrock V was next purchased by T. O. M. Sopwith, who used her as a trial horse for his Endeavour s in 1933 (Rainbow vs. Endeavour) and 1937 (Ranger vs. Endeavour II). Shamrock V subsequently changed hands several times. An auxiliary diesel engine was installed and she was at one time rigged as a cruising ketch. While owned by the Immobiliare SIFI Spa in Sardinia, she was named Quadrifoglio, Italian for "shamrock." In the 1980s, she was acquired and restored to her original rig by the Museum of Yachting in Newport, Rhode Island, where she is maintained in sailing condition.