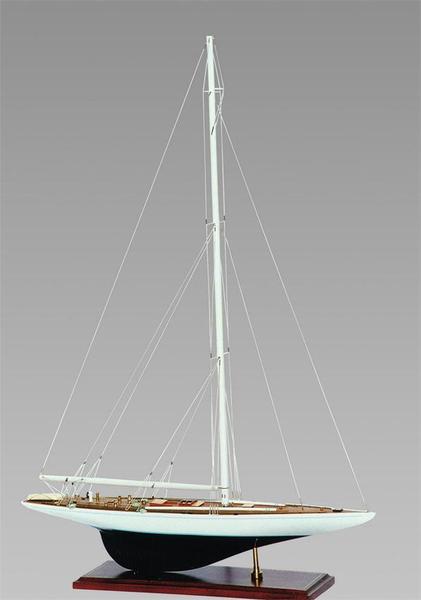 Museum Quality History of the Enterprise:

The four boats built for the 1930 defense were Enterprise, Whirlwind, Yankee, and Weetamoe. While none were shaped by Nathanael Herreshoff, who though alive was in failing health, Whirlwind was designed by his son, L. Francis. William Starling Burgess' heritage weighed heavy upon him: his father, Edward Burgess, had designed three victorious defenders: Puritan, Mayflower and Volunteer. In 1930, he was commissioned to build a defense contender by the businessman Harold S. Vanderbilt. This was not the first of Starling's tribulations. William S. Burgess left Harvard halfway through his studies, and made his debut in naval architecture. At the turn of the century, he built an aircraft under license to the Wright brothers. He was an inventive, curious engineer, with a desire to innovate and improve. In 1930, he designed the J Class Enterprise, nicknamed the mechanical boat, the model of which he tank tested before building. His brother, Charles Paine Burgess, carried out sail and rigging tests in the University of New-York wind tunnel, and inspired by studies by Doctor Manfred Curry, designed the famous Park Avenue boom. The mast was a masterpiece in riveted duralumin. Nevertheless, Enterprise had a struggle to be selected in the American trials against Weetamoe, Yankee and Whirlwind. In the final race, thanks to the masterful hands of Mike Vanderbilt, Enterprise crushed Shamrock V, just before the finish, Starling Burgess was awarded the honor of steering his boat to victory. Sir Thomas Lipton's last attempt was a dismal failure against Mike Vanderbilt and his Enterprise. But popularity of this famous owner of the Shamrock Yachts was such that the public response to a subscription to award him a souvenir cup in gold massive. Overwhelmed, the ordinarily loquacious gentleman was scarcely able to utter a few words, "although I have always lost, you make me think I have won. Today Enterprise was too fast but I will come back to win this damned America's Cup".