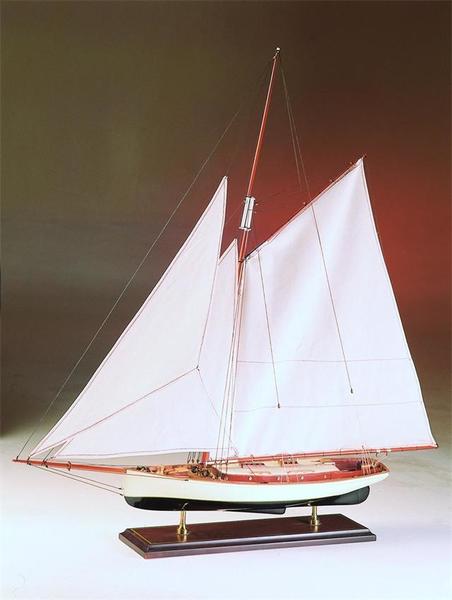 Museum Quality History of the Mischief:

Archibald Cary Smith was 25 years old when he launched his first 16' boat. In 1872, he became a member and Measurement Official of the New York Yacht Club. After having launched different schooners and sloops he designed Mischief in 1879 as the defender of the 1881 America's Cup.Mischief was built by Harlan and Hollingsworth, at Wilmington, Delaware. She was the second American yacht to be built in iron. The 1881 issue of the America's cup did not capture the attention of the crowd, as Mischief appeared from the beginning to be really superior to her competitor Atalanta, the Canadian challenger. However, it took an important place in the history of the America's Cup. After this pitiful race, as they were afraid to loose the interest of the public for the America's Cup, the members of the New-York Yacht Club decided to change the rules of the race. The trophee was returned to the sole survivor of the ''America'' syndicate, George Schuyler, so that he could modify the Deed on Gift. Mischief was to continue with a long yachting carreer, until 1901. Then she was used as a barge and for shipping oil in the Boston area until 1929, when she was put up for sale for scrap. Concerned by her impending fate, Boston yachtmen pooled their resources to buy the wreck and scuttled her ''decently'' at their own expense.