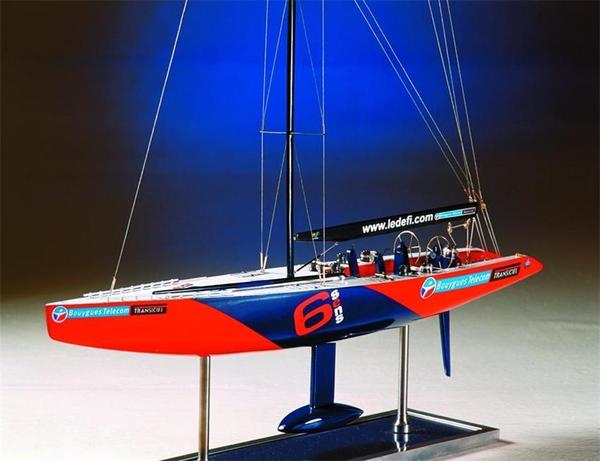 1999 saw a new challenge structure with a dynamic, resourceful and youthful syndicate. Originally called Yaka, (French slang for 'just do it') the syndicate was the brainchild of Luc Gellusseau and Pierre Mas, of Corum Sailing Team fame. Gellusseau, who now runs the technical and design team, had managed to group together the best bits of the previous French challenges along with a large quantity of new, young talent. He and Mas realized that it was important to stay out of French national politics and to that end the syndicate was a relatively small budget operation. The sponsorship was supplied early by two technology companies, Bouygues Telecom and Transiciel. Le Defi, as it is now called, only dreamt of building one boat and were well organized, completely transparent and very motivated. Bertrand Pacé is at the helm of the boat, Thierry Pepponet was tactician and the well-respected Dutchman Marcel van Triest was navigator. Pacé, undoubtedly France's most talented helmsman today, is a top ranked match racer - world champion in 1994 and runner-up in 1998 - commands huge loyalty amongst his crew and is mature in his approach after three Cups. The design team included such notables as Bernard Nivelt and Daniel Andrieu along with other names from the French world of composite structures and aerodynamics. The stated goal of the French Team was to do well and to get to the Louis Vuitton semi-finals. They succeeded with their victory against America one, and reached to an honorable 6th rank.