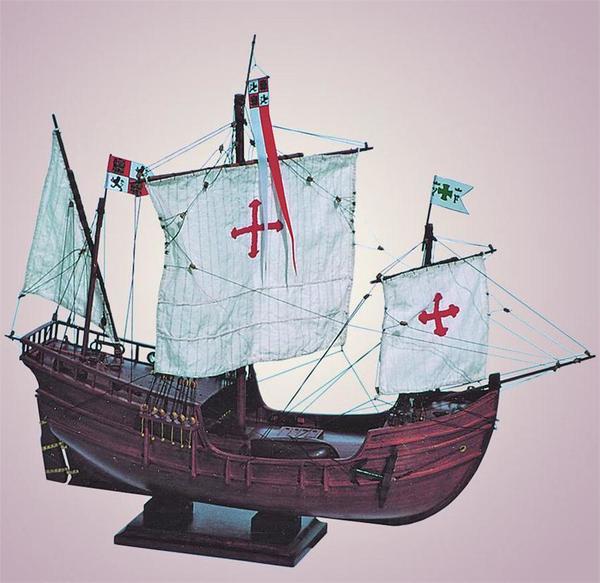 The third ship of the Christopher Columbus expedition of 1492, Pinta was a square sails caravel. The sails consisted of a square foresail and a great mainsail, while the mizzenmast supported a long yard for a triangular sail. It had a poop quarterdeck and, unlike the sister ship Nina, also a forecastle. The Pinta was the fastest of the three ships, confirming the log books, which indicated that this caravel was often ahead of the other two ships. The Pinta was captained by Martín Alonso Pinzón, a leading mariner from the town of Moguer in Andalucia. Pinta was a caravel - a smaller, lighter, and faster ship than the tubby Santa Maria. We don't know much about Pinta, but it probably was about 70 tons. Philips puts the length of Pinta at 17 meters, keel length 13 meters, beam 5 meters, and depth 2 meters. She probably had three masts, and most likely carried sails like those of Santa Maria, except for the topsail, and perhaps the spritsail. After her final return home in 1502, Pinta disappeared without a trace.

Our collector ships are hand crafted by a highly specialized artisans’ guild in the Dominican Republic according to the strictest of standards. The workmanship is unbelievable!  The Pinta Collector's Ship is accurately painted with at least two coats of paint. Five coats of lacquer are also applied, and the model is sanded and polished at each stage, giving the work a radiant finish that protects and preserves. The number one goal in building our ships is to obtain the highest degree of accuracy that is possible. The detail work on the Pinta is mostly made of metal. Some plastic is also used. Careful precision in detail is made even in the lines, which are made of hard polyurethane. The Pinta's sails are made of cotton, representing the fine cloth used on the original. The Pinta comes with a certificate authenticating the master who made it, it's country of origin, how the ship was made, and more. It also comes with a gold colored plate that displays its name and year. They are packaged in two double-walled very strong boxes, supported with forms to insure their protection during shipping. They are mailed via UPS Air to further protect them and for expedient delivery. Instructions on how to unpackage the ship are found after opening the first box.