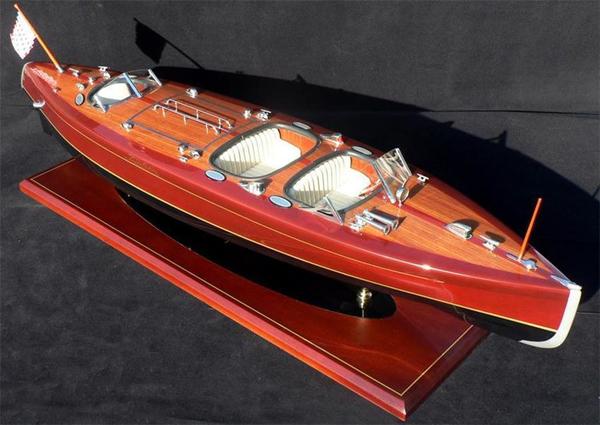 Museum Quality History of the Typhoon:

The pedigree of the Typhoon dates back to the days of the Gold Cup Races. The original Typhoon was designed in 1929 by George Crouch. Among the other famous designs from Crouch were the ever-popular Baby Bootleger and the award-winning Teaser, to name a few. The Teaser became famous by winning the celebrated time trial against the Twentieth Century Limited from New York City to Albany in 1925. She beat the record by more than an hour. The Twentieth Century Limited was the fastest train on the rails at that time. The Typhoon origin began with Edsel Ford. Ford was an avid race boat enthusiast. Knowing the background, and seeing the famous Teaser in action, Ford wanted a new fast boat just like it for his own personal use. He contacted the yard that built the Teaser and had an exact copy built, naming it the Typhoon. The Typhoon was a large brute, measuring in at 40' in length, with a 2000 cubic inch Wright Typhoon engine. Like a wild stallion, she was born to race. She had the seating capacity to seat up to eight adults, in three separate cockpits, but without the creature comforts and safety of any windshields. Ford never used it as a pure racer, however. His primary use for the boat was as a commuter speedboat between the Ford factory and his home in Lake St. Claire. In 1941, Ford sold the Typhoon to Howard Hughes who kept it running during the war years, but soon sold it after the war. The Typhoon then went through a series of owners over the next few years ending up in Kentucky. Then in the late sixties, her current owners had her shipped from Kentucky to Seattle Washington. In the late 1960's, at Bryant’s Marina in Washington, the boat that was docked next to the Typhoon caught fire. The fire raged out of control, and soon engulfed the her. The Typhoon was a total loss.