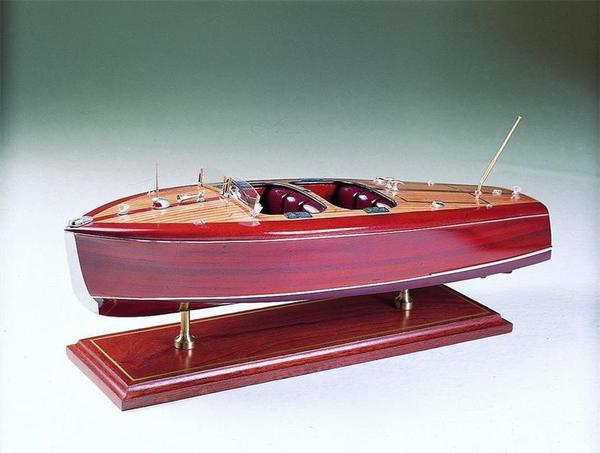 Chris Craft was the largest producer of mahogany boats in the country. In one year alone, one million feet of mahogany was delivered. Chris Craft was known to have sleek designs and a large market share. Once the "Barrel Back" style was introduced it took the market by storm. Its pointed bow, and curved transom create a sleek design.

The legend of Chris-Craft began in 1884, when Christopher Columbus Smith began the Smith Boat House on the St Clair River in Algonac, Michigan, to manufacture small duck boats and power launches. Later, the company was extended to Chris Smith and Sons Boat Co. Many of his larger runabouts were used as taxis; transporting guess on the riverfront to resorts, or to various sightseeing attractions. In the twenty's, mostly runabouts were produced, but with the introduction of his speedboats, Chris Smith's fame took off. Truckload after truck of Philippine mahogany would arrive at the factory daily. No wood was ever wasted. First, the lumber was air dried; then various hull parts were laid out using templates and patterns, were cut into plugs to be cemented into the counter sunk holes of the screws. All scraps were burned in the furnace for fuel. The decade of the thirties showed a tremendous growth in the company despite the market crash of 1929. However, in 1939, Chris Smith succumbed to an illness that had begun to affect him years before. The death of Smith did not deter the growth of the company. During the forties, especially the war years of '42 to '45, Chris Craft produced over 12,000 LCPR (Landing Craft Personnel Raft) for the Army. Ninety-eight other pleasure craft were also produced. During this time, the "Barrel-Back" style was introduced. With its pointed bow, and curved transom, it created a sleek look that took the market by storm. The post-war economic boom at Chris-Craft was felt in increasing sales and the new product lines. Even with a management change that took place in the early eighties, Chris-Craft bounced back with sleeker designs and a greater market share. Chris Smith would have been proud. And the legend continues...