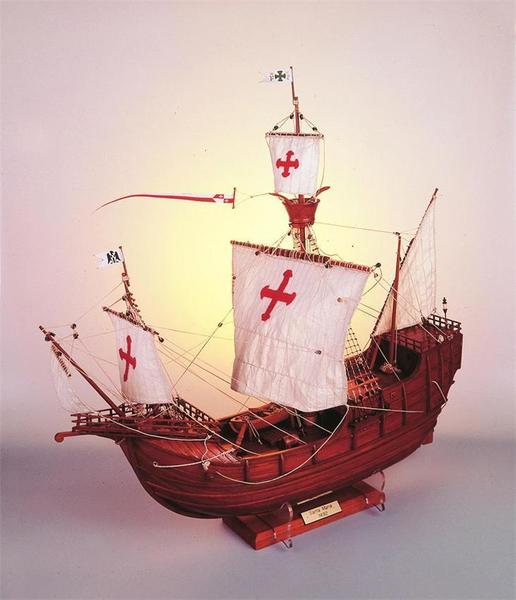 The Santa Maria Model Ship is a perfect design of what the Santa Maria looked like. This would make for an awesome gift for any friend or family member who is interested in American History. This model ship is one that looks great wherever you decide to put it. Whether you take this elegant and beautiful model ship to your office, or put it in your favorite room at your house, it is sure to liven up the atmosphere. Below is the incredible story behind the Santa Maria.

Built in Galicia, Spain, in 1492, the Santa Maria became immortalized as she joined the Nina and the Pinta in carrying Christopher Columbus on his first voyage to the America's in 1492. Columbus had acquired the Nina and the Pinta, but hired the Santa Maria to accompany him. The Santa Maria was a merchant ship owned by Juan de la Cosa, who sailed as pilot. Though the Santa Maria was not especially a large ship for her day, she was chosen by Columbus to be the flagship. She set sail on August 3, 1492 and landed in the Bahamas on October 13 of that same year. The Santa Maria had the nickname La Gallega. It was a nao, which simply means "ship" in old Spanish; today, we might call such a ship a carrack. She was fat and slow, designed for hauling cargo, not for exploration. Some sources say that the Santa Maria was about 100 tons, meaning that it could carry 100 toneladas, which were large casks of wine. There has been much speculation about just how large such a ship would be; the best current thinking, by Carla Rahn Philips, puts the length of Santa Maria at 18 meters, keel length at 12 meters, beam 6 meters, and a depth of 3 meters from keel to deck. The Santa Maria had three masts (fore, main, and mizzen), each of which carried one large sail. The foresail and mainsail were square; the sail on the mizzen, or rear, mast was a triangular sail known as a lateen. In addition, the ship carried a small square sail on the bowsprit, and small topsail on the mainmast above the mainsail. Columbus took possession of Haiti on December 5, 1492. While making their way Eastward on Christmas Eve, tragedy struck the Santa Maria as she became grounded on a coral reef. She was ruined, and the crew spend Christmas Day salvaging whatever they could. Since it was no longer possible to carry the whole crew, Santa Maria's timbers were used to construct a fort (La Navidad) in Haiti. The Pinta and Nina returned home in January, leaving thirty-nine crew members behind. As fate would have it, none of the men survived to greet Columbus on his return in November 1493. Many replicas of the Santa Maria have been built since the 400th anniversary of her first voyage, but as no historical plans exist, the dimensions vary greatly.